The Rosita project, centrally situated in the municipality of Rosita in the Región Autónoma de la Costa Caribe Norte, Nicaragua, is located an approximate distance of 390 kilometres northeast of the capital city of Managua and 120 kilometres west of the port town of Puerto Cabezas . The facility at Puerto Cabezas is a shallow water port with capacity for large ships (500ft) and serviced by three shipping lines.

Nicaragua is historically the principal gold producing country in Central America. It has a rich history of mineral exploration and production. There are 3,356 hectares in the prolific Bonanza-Rosita-Siuna Gold Triangle, 275 km NE of Managua, capital of Nicaragua, with more than 100 year of Mining History in the area. 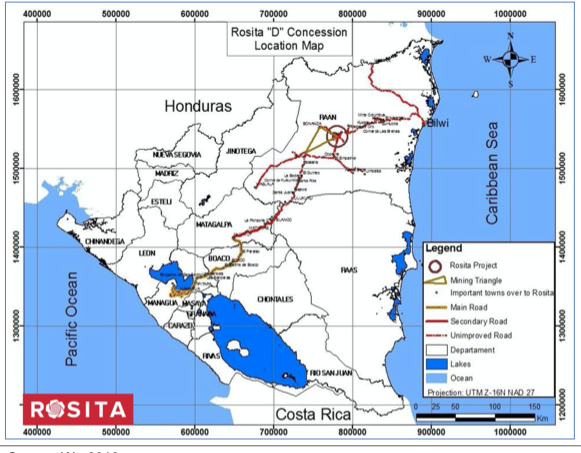 PAST PRODUCER IN NICARAGUA


FOCUS ON ENGINEERING AND PRODUCTION

– Optimizing metallurgical process to maximize gold and copper recoveries, SGS;
– Designing Treatment Plant to recover gold and copper from the Stockpiles and the Tailings. DENM Engineering. Flow sheet in Slide 10

The Rosita project is registered with the Ministerio de Energía y Minas (“MEM”) as exploitation concession number 821, Accord number 55-DM-38-2007 comprising 3,356.9 hectares with an Expiration Date of June 9, 2044

The Santa Rita pit within the Rosita D Concession is a Cu-Au-Ag skarn deposit that has been previously mined in the period 1959 to 1975. Some current artisanal mining activity continues today.

Northeast Nicaragua lies within the eastern extension of the North Interior Highlands geomorphic province. Limited exposures of ultramafic rocks indicate that portions of the region are underpinned by oceanic crust of postulated Mesozoic age. The eastern third of the Rosita concession is underlain mainly by folded and faulted carbonate sedimentary rocks of the Todos Santos Formation.

To the west are andesitic to basaltic volcanic rocks that have been intruded by a series of stocks and plugs that include diorite, quartz diorite, granodiorite, quartz monzonite, and granite. Hydrothermal alteration associated with emplacement of the intrusives has led to the development of large areas of skarn and hydrothermally altered rock.

Thank you! Your submitted information has been encrypted and stored securely.